Among UNESCO’s world heritage sites, is a place called Vitlycke museum. This places is home to a few ancient carvings that apparently depict ancient Nordic practices. The museum is housed in a district called “Tanumshede”, which falls between Goteborg and Oslo. Since I was at Goteborg for a business visit , I decided to visit Tanumshede on a beautiful , sunshiny saturday. I came back with one of the most wonderful experiences I would look back to and smile at for a long time.

Getting off the bus at tanumshede after a good 2-3 hours of travel , I found myself  in a mostly residential town. Direction-dumb people like me absolutely need a smart phone – not because we chat ,whatsapp , or stay on line all the time, but because the GPS installed on our mobiles often comes to our rescue when we lose ourselves(just about all the time!). Two kilometers, a left turnm and 1 kilometer later, I found myself awestruck looking at some of the carvings in front of me.

One of them that intrigued me the most showed a man raising his hands (in prayer it looked like), to a snake moving in front of him. Looking at it made me  wonder  whether the festival of Nag Panchami in India had any significance after all. People who come from this side of the world say that worshipping snakes gives us knowledge, but I find that story hard to believe. Why did we need to have a godess of knowledge if it was true ? Why did she have no snake next to her? I always thought these were stories , and that we were worshipping snakes in order to please them,and preventing snake bites.  Reading the note next to this particular carving, I realized that snakes were considered omens of rainfall, and that one of the inferences made by archaeologists about this carving was that the man was raising his hands in prayer to the rain-gods, asking for rain (since seeing a snake meant rain would soon arrive).

Pondering over whether the Indian culture originally started worshipping snakes for the same reason, I started walking back to the bus stop, not wanting to miss the last bus to Goteborg. There was no bus waiting. “Patience is virtue” I told myself. Ten minutes later, I heard some shrill voices. Three ladies came in to the bus stop laughing. One of them asked “Is this where you board a bus to Goteborg?” “Yes!” said I, relieved to have found some company. We waited for half an hour. No bus came.

Someone once said “Its not what you look at that matters. Its what you see” . All of us had looked at the time table put up at the bus stop . Only one lady had the the wisdom to see the months they were put up for, (even though written in bold, above the time table !) . The time table was for august, and we were in September ! A few frantic phone calls later, we heard the people at the local transport helpline tell us – “You will have to go via Uddvala” . “So, when’s the next bus?” I asked “9.30 pm” he said.

“Stranded.. well done!” I congratulated myself, and went back to wondering why the indian culture worshipped snakes. “Kaffe ?” A voice  asked waking me up from my thoughts. “Sure !” I smiled . Glancing at my watch, I found the time to be 16:30. How am I going to spend 5 hours with three old women? I wondered.What followed from then on was one of the nicest evenings I have had in my life. We headed to a restaurant called “tanums gestgifveri” .Chatting over a cup of hot coffee, my new friends told me I was at the oldest restaurant in Sweden.  Some food , and  a couple of Irish Coffees later. We headed to the bus stop at around 20:30 (well in advance to make sure we didn’t miss our bus) .

Through the journey, one of the ladies (Gunilla) was sharing seats with me . We chatted and chatted about her interests, about mine, about my job , her trip to India and what not ! She was close to 60 or 70, and I, just about 30.  I hugged my new friends and bid  them good bye as we dis embarked at Uddvala, and went running in to the bus stop thinking I would miss the next bus to Goteborg.. only to get in and find it was delayed.

Turning around with the intention of looking for a place to sit, I was taken aback- There they were, warmly smiling . “Don’t worry , ok? You’ll be safe ! We just came in to check if there were others accompanying you”. I walked up to them and gave them a warm hug , wondering if our paths would ever cross again. None of us can help getting older, but these three women chose not to get old. They were all patrons, (the youngest among them was sixty!). But they were contented with life, and seemed to have lived it fully, and had no regrets whatsoever. Age to them was just a number.  Would  I be so satisfied  when I reached that age?  I wondered. 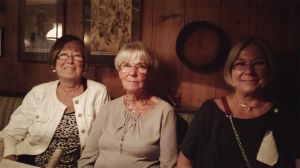 Oh I forgot- Why on earth do we worship snakes in India? Is it because they indicate arrival of the monsoons ? Thoughts?

Some recent thoughts coming out of my demented mind

Topics my demented mind writes about: